This summer, after having completed my first errandonnee, I started thinking I could probably do a theme within a theme for my coffeeneuring challenge in the fall.   I started jotting down ideas and before I knew it, I had 6 great ideas going.

So onto my coffeeneuring challenge.   What did I end up doing?


On October 7th, my co-worker, wife and I all took to the road for a new place that was further than we would normally ride, but why not, it was a nice day. 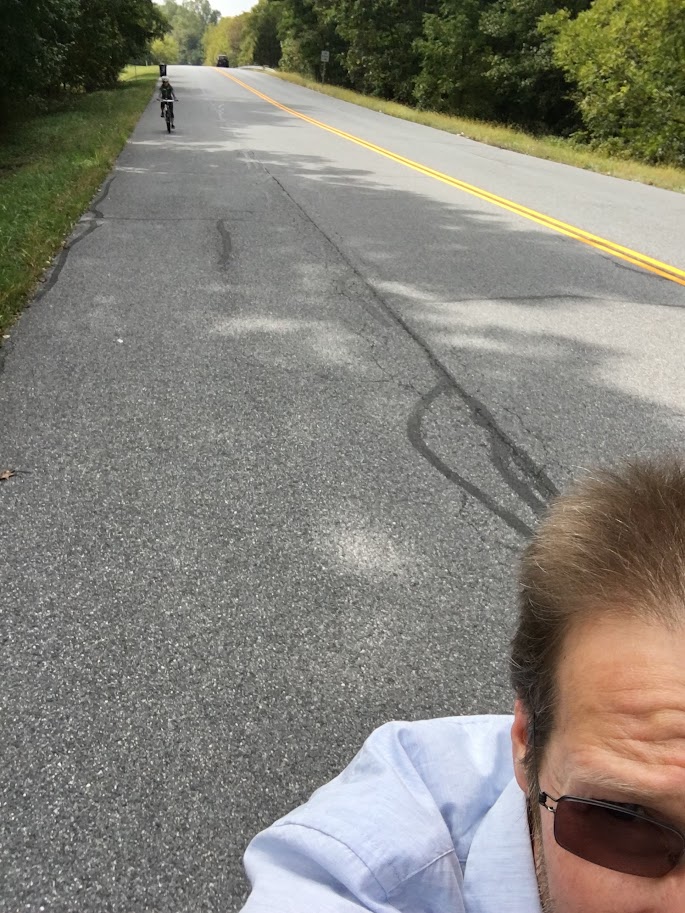 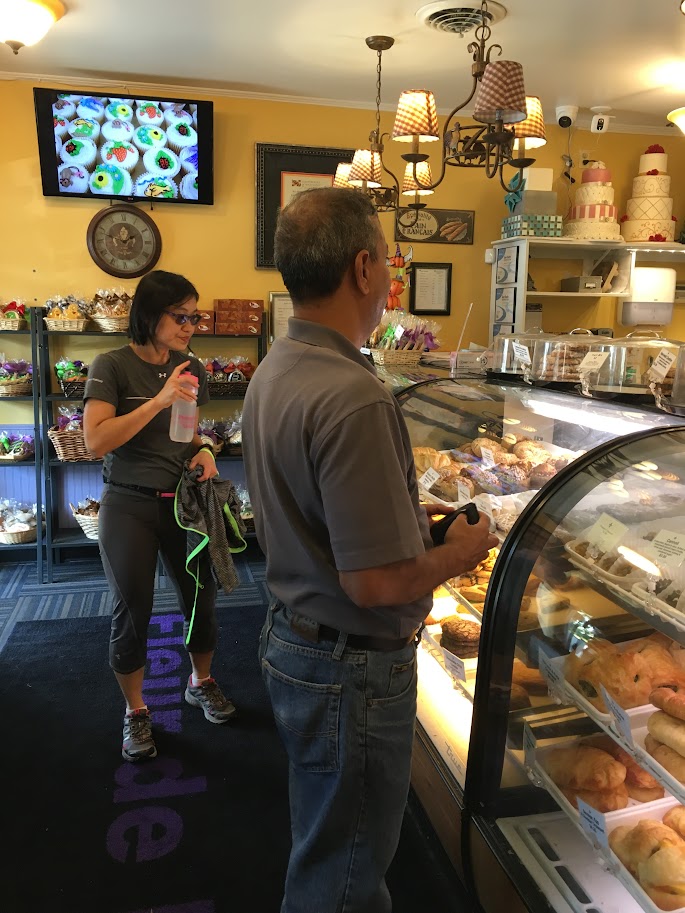 Although we attempted to sit outside, it was still to early in the season for sweets outdoors.   The bees found us quickly and we had to move indoors. 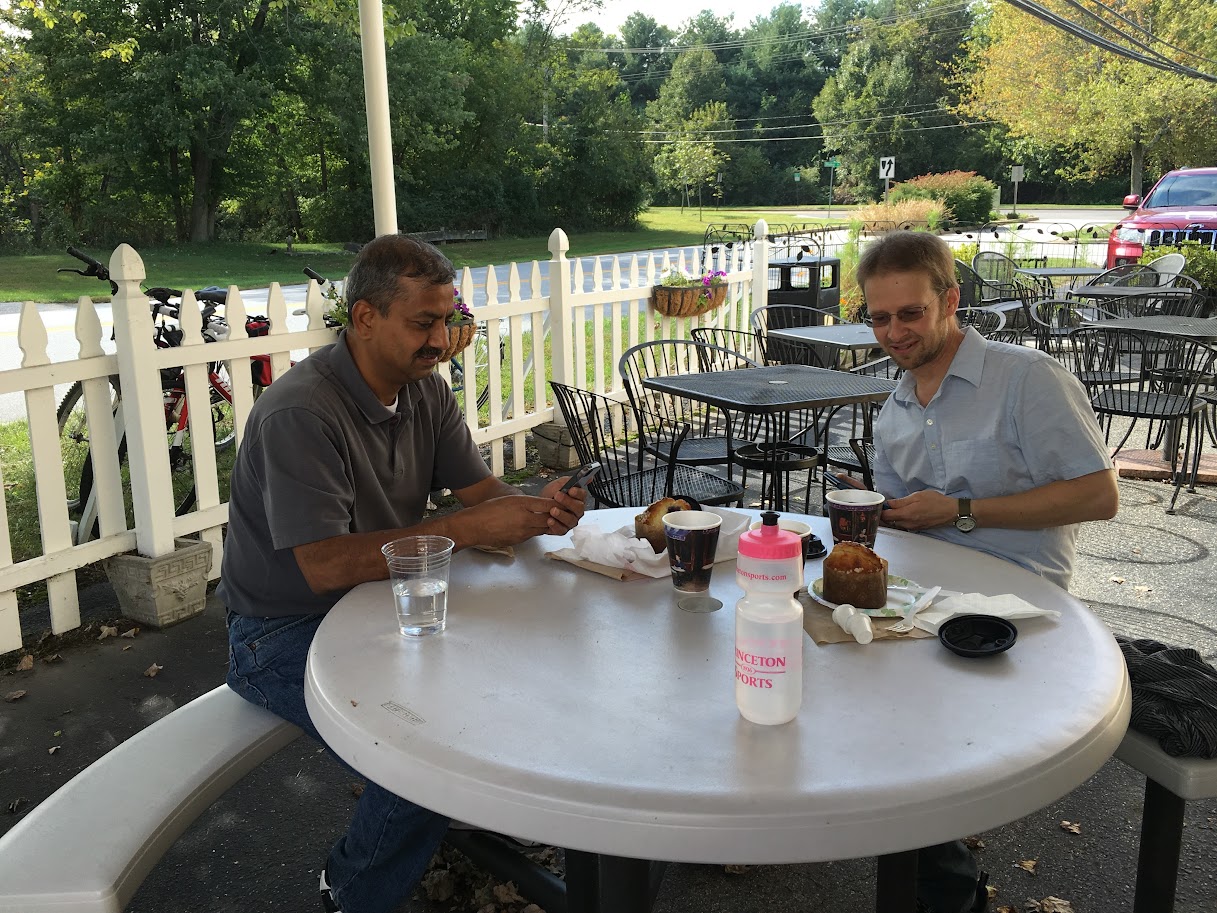 The approximately 9 mile ride took us to Atholton Shopping Center, 10400 Shaker Dr, Columbia, MD 21046 where we relaxed with typical joe at Touche Touchet Bakery and Pastry Shoppe.  I don't believe we had to carry anything back with us; all was consumed on premises.


A little time passed and I kind of missed a week of coffeeneuring.   But on October 19th, the wife and I were able to rent some bikes for a little ride around the San Diego area.   We wanted to take a spin around the Coronado Island, but as we head south from the city center, the roads were not necessarily bike friendly having large trucks and very long stretch adjacent to the Navy Base with lots of fencing to admire.   As we neared the southeastern of the bay, we came across a hopeful site that maybe bikes do belong out here in the barren landscape. 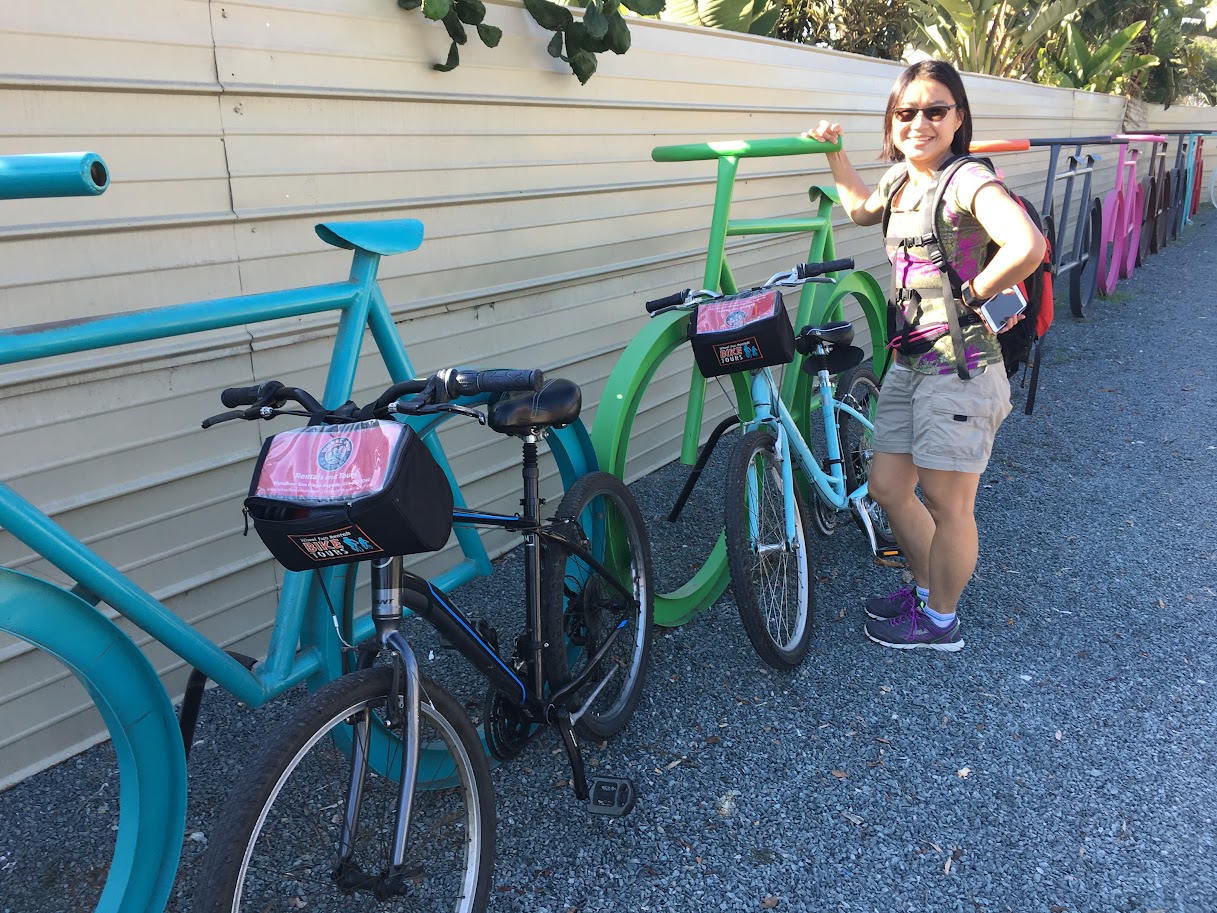 And returning via the small strip of land that makes up Coronado Island and its wildlife refuge was gloriously fun. 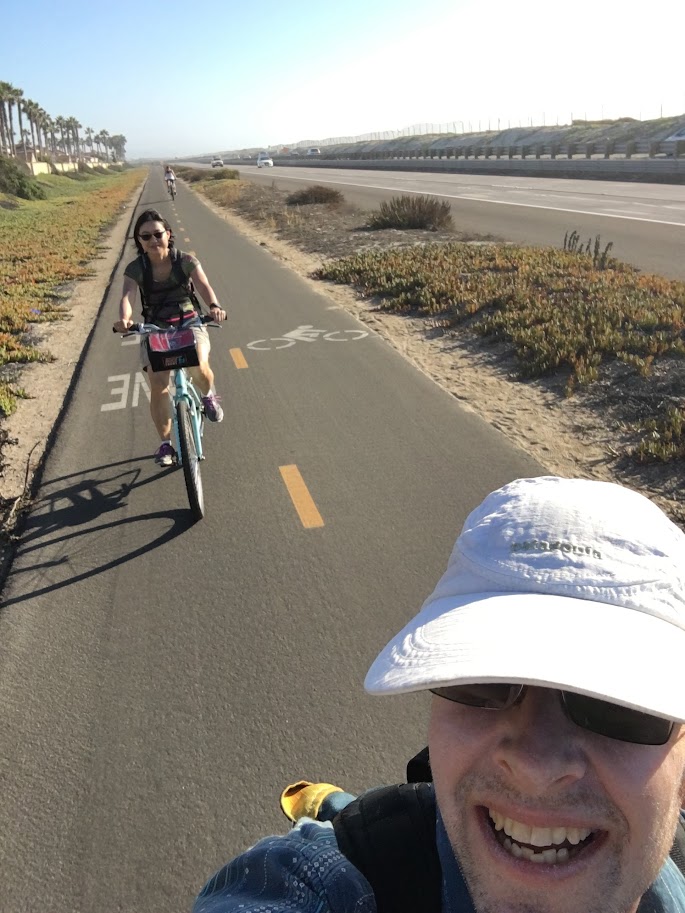 We were also rewarded with  spectacular roads, paths and views. 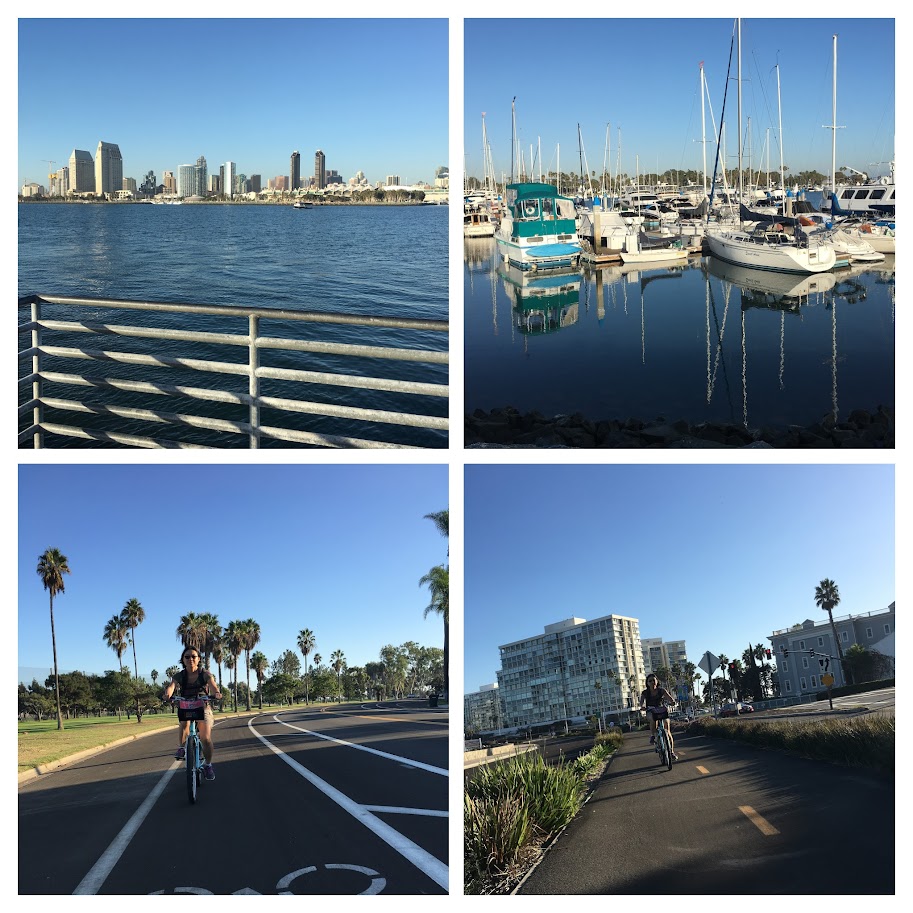 We ended up getting our coffee (something something latte) from the Coronado Coffee Company (Coronado Ferry Landing, 1201 1st St, Coronado, CA 92118) while we waited for the ferry to get us back into downtown San Diego after our 25 mile loop. 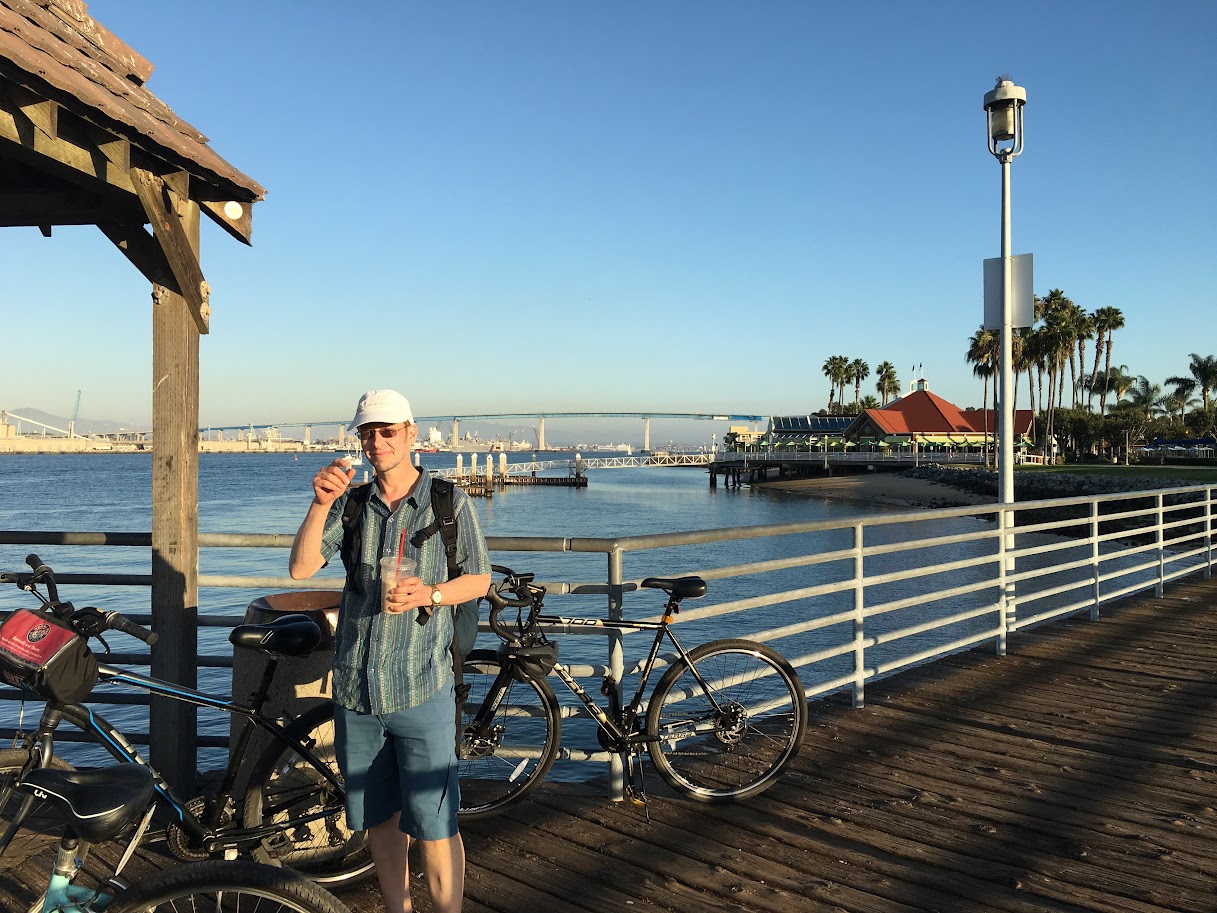 Ah, back home at Nagadi Coffee (9325 Fraser Ave, Silver Spring, MD 20910). No surprises here, my favorite coffee roaster always gets a visit and they did on Oct 19th.  Since they are only open to the public on Saturday mornings, a bit more planning always surrounds this event.  But my co-worker and I were able to arrange a low-key meetup and ride over. 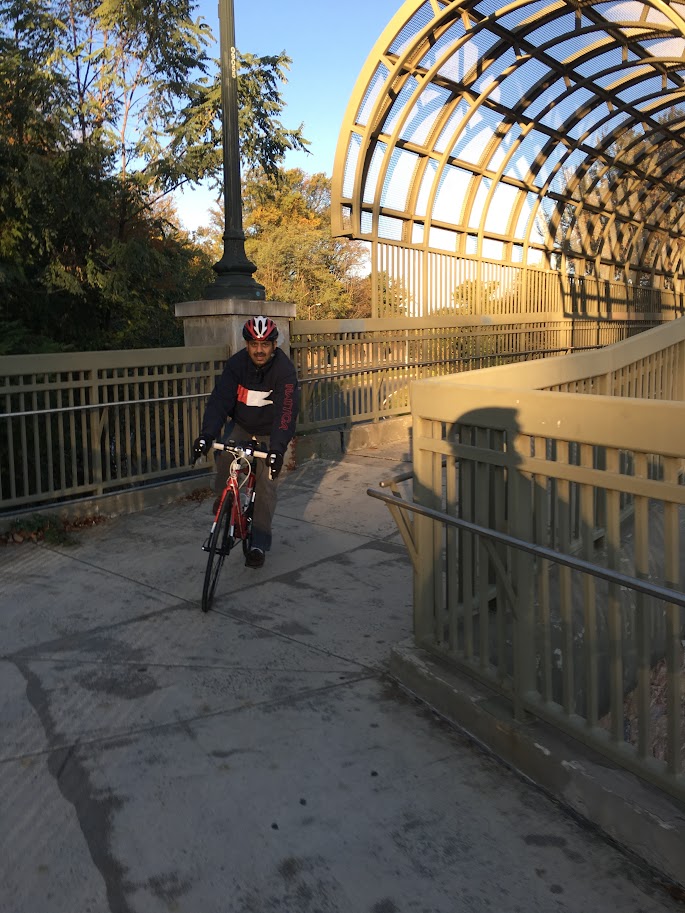 It was certainly the first chilly morning I've encountered on this year's Coffeeneuring Challenge.   Catching this space early in the morning gives me a chance to chat with Josue, pictured here preparing "something".   It will become a bustling little coffee shop by 9am. 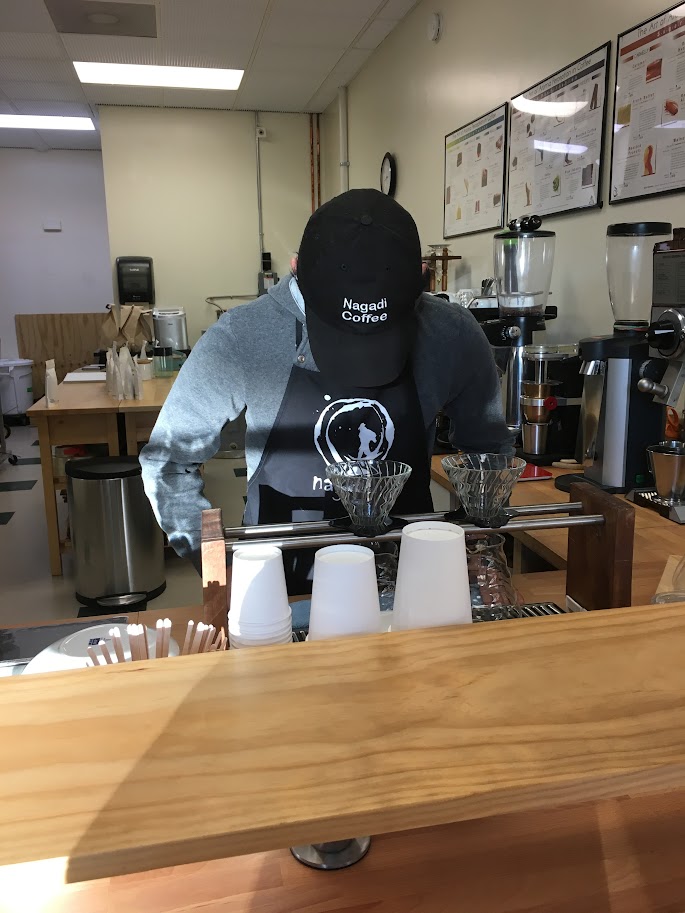 We did have a timeline, so after our espressos we had to bolt, the full mile back to our starting location.   Twas fun and I wish there were more local roasters/shops like this one.

After some fun and unique experiences, the weather wasn't as nice in November and time was running out.  After some recalculations I noted that I hadn't procrastinated enough and it was still possible for me to finish my Coffeeneuring Challenge.   So while out for a business lunch, I popped into a Dunkin Donuts on Nov 9th. 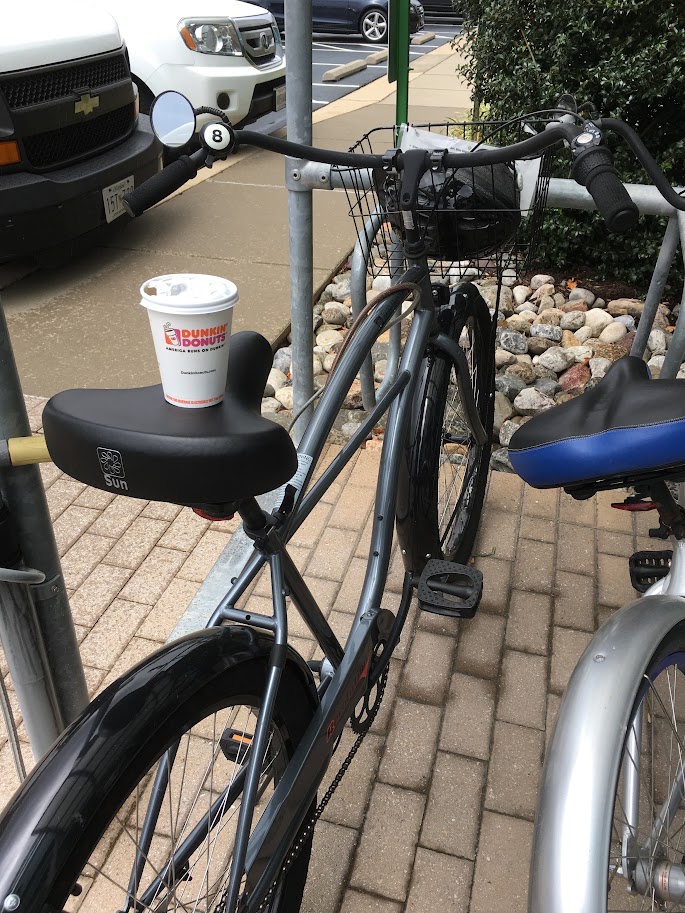 What you see there is my coffee on the seat of our campus bike share, yes campus bike share!!  I'm sure it's what got us to the Silver Level of Bicycle Friendly Businesses from the League of American Bicyclists.   Having these available to ride between our separate, but nearby, campuses also allowed me to grab some coffee and call it coffeeneuring as I made my way back to my office. 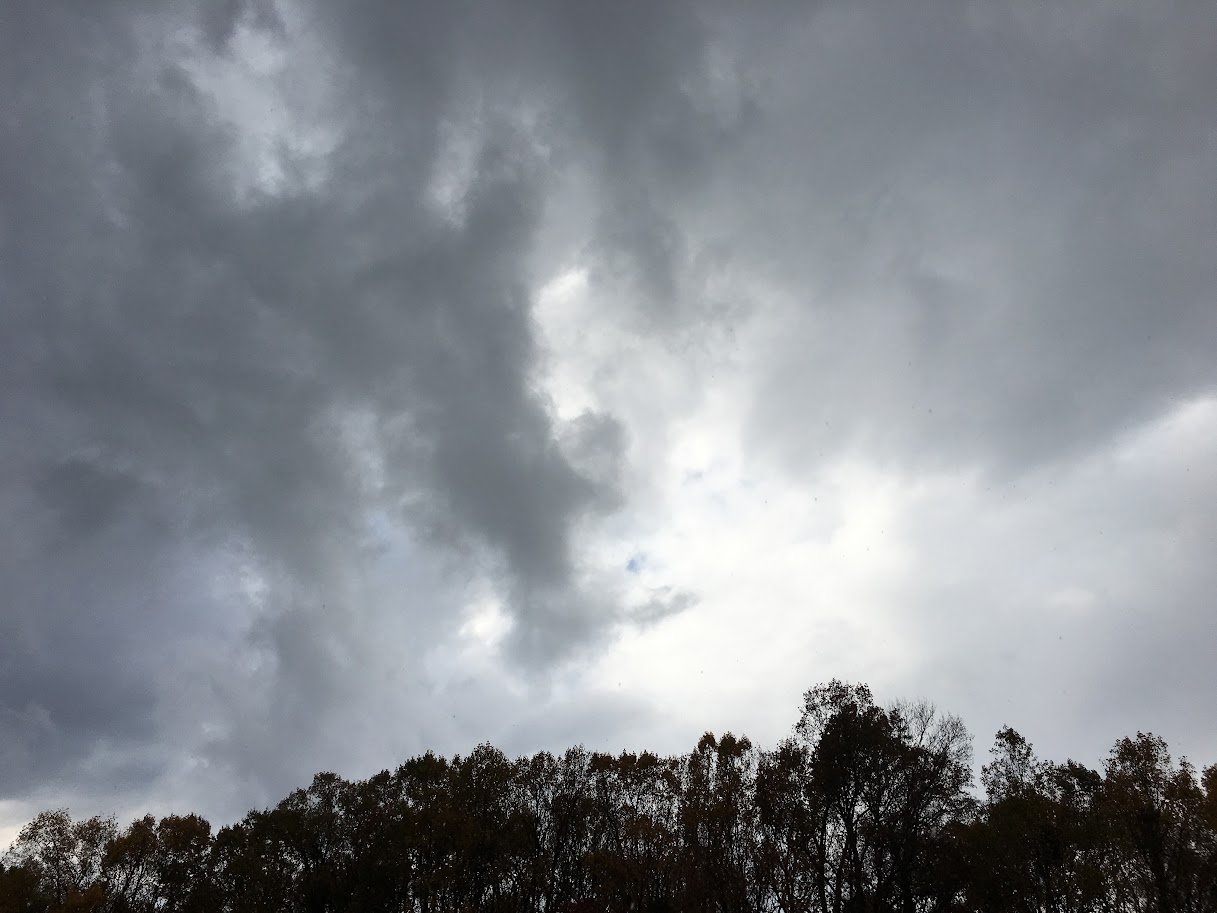 We rode quickly as the weather looked threatening and managed to take the long way in order to get our full two miles. 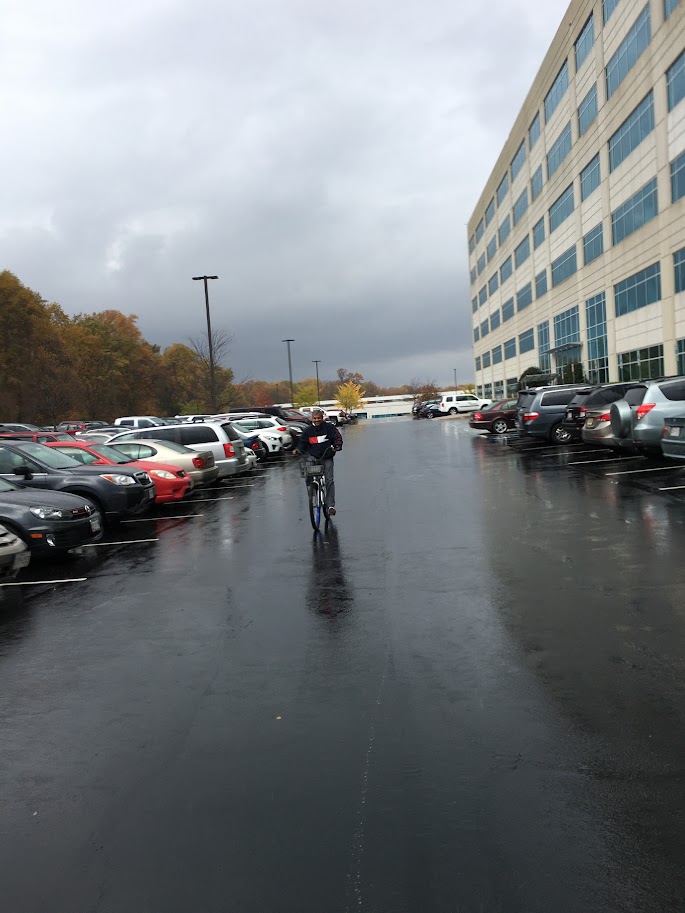 Nevertheless, we still got hit with some steady rain moving through.

Having such a successful campus bike share ride and finding it quite convenient, my co-worker and I decided we could hit another local fast food joint, he says the coffee isn't so bad there.   Ok, let's ride.

On Nov 14th, we made our way over to the Chick-fil-A (10975 Johns Hopkins Rd, Laurel, MD 20723) got a couple of fresh made coffees and then proceeded to run an errand on the east campus. 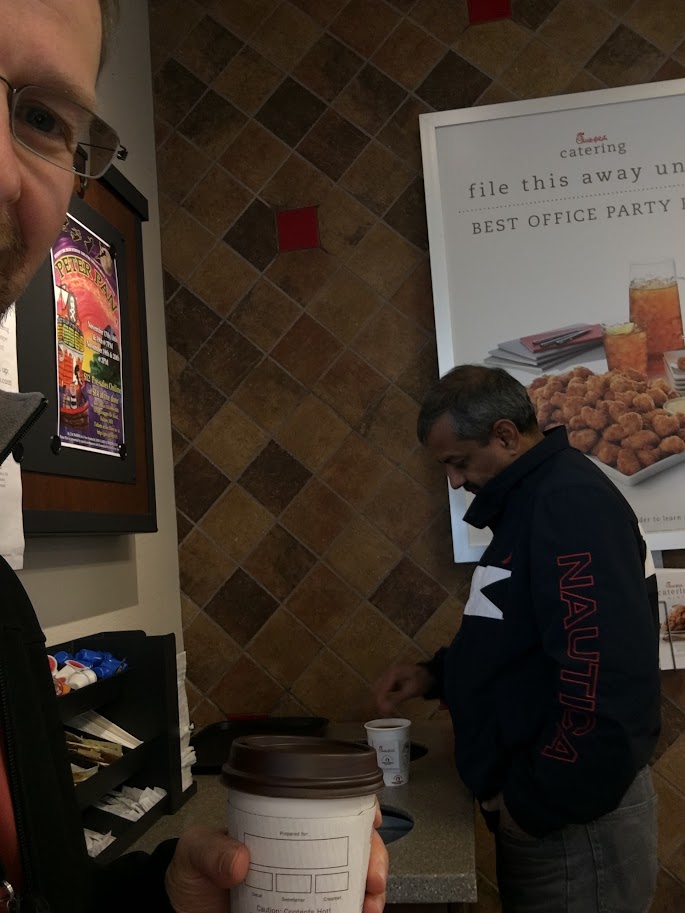 Today being a much nicer day (no rain) gave us plenty of options.  How long do we make the long way back to main campus? 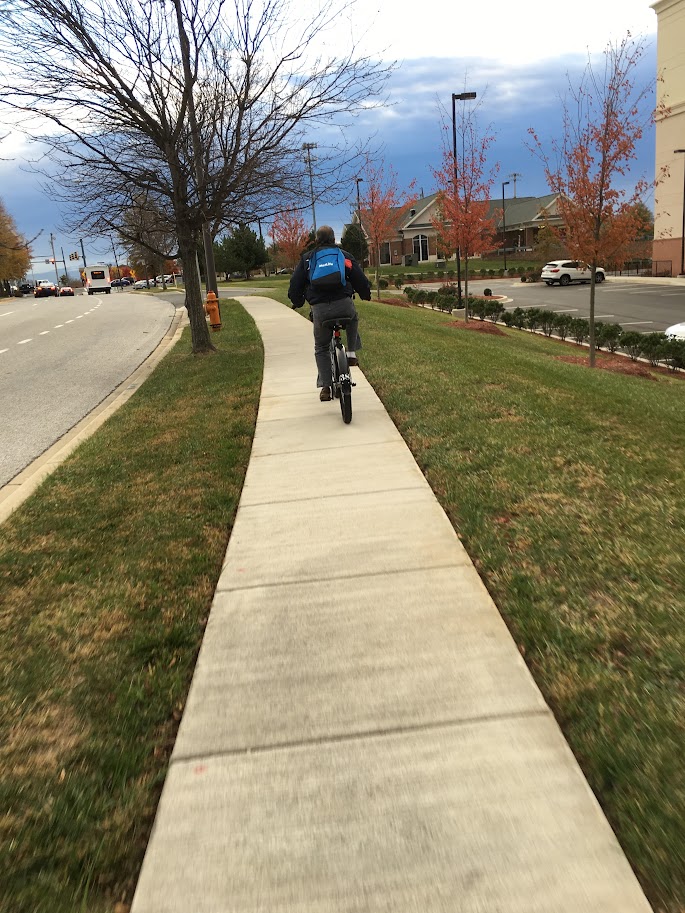 We headed to the north end of campus where there was a recent fire that damaged the pavilion.  I took my photo from a distance, as I think they were still investigating the cause and didn't want too many people around. 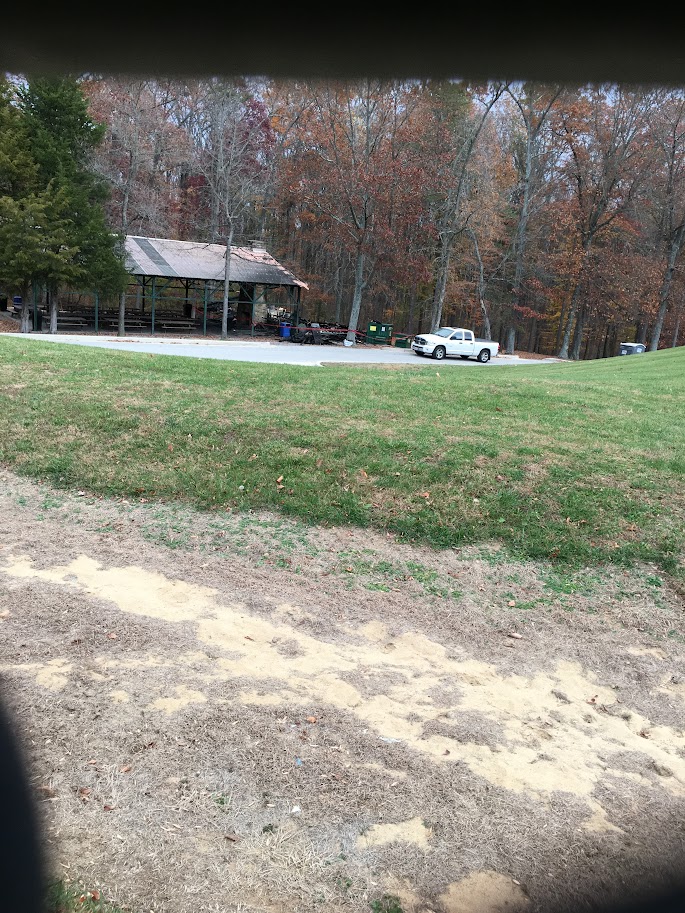 This little side trip easily put us over 2.5 miles of riding, and I can tell you that the campus is not flat.


Another staple for my coffeeneuring submissions is heading down to Sidamo Coffee and Tea (8180 Maple Lawn Blvd # F, Fulton, MD 20759) since it is just off campus in a nearby community.   It is almost walkable, if you don't mind an extended walk, but today Nov 18th,  we biked, of course to get our 3.6 mile ride. 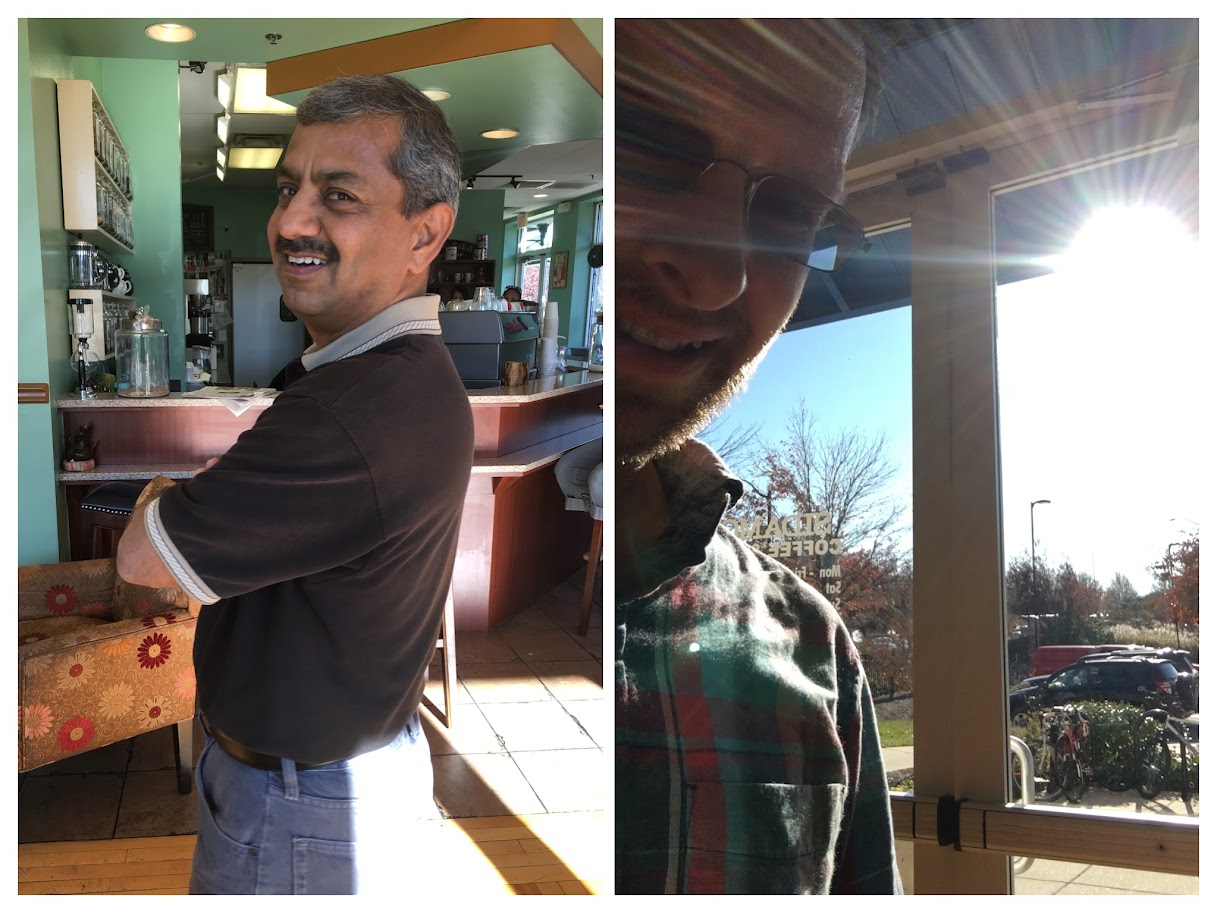 We sat outside in the nice warm sun, no bees, and a nice sweet mocha latte for both. 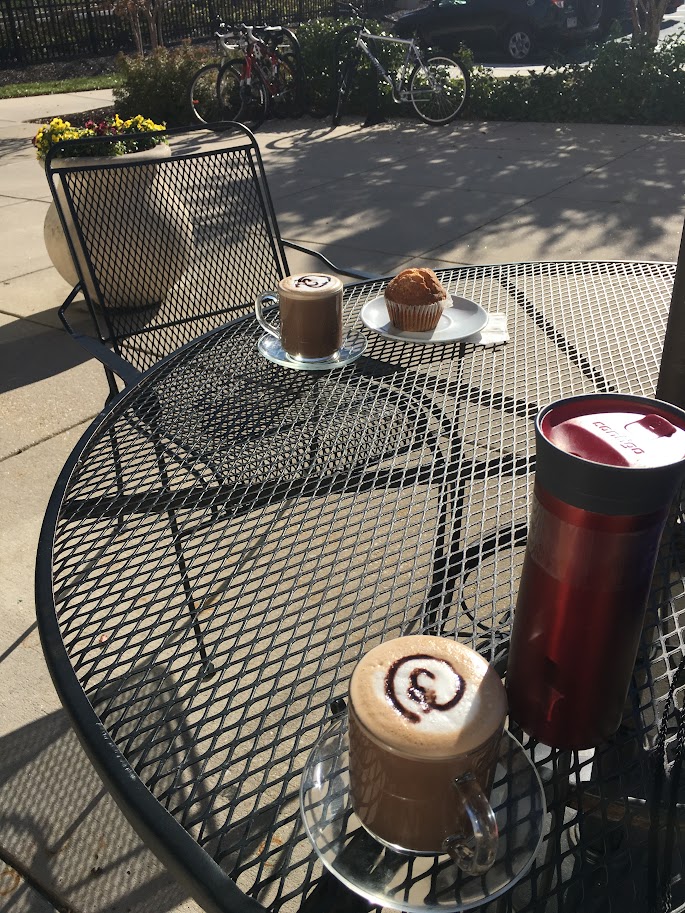 
The struggle to get to seven.   As I wholeheartedly supported rule #4, I think it might have pulled me in the wrong direction.   Instead of planning purposefully, I would randomly choose a day to ride knowing that I could easily ride Tuesday.  If I didn't ride Tuesday, I could ride Wednesday.   It was a failure to plan and a delight in making my own beverages.   Although I didn't open my own coffeeneuring coffeehouse, I certainly have enough practice for next year.

Soon, I believe we will have two baristas in the house and then, pending rule changes, we might be able to open the coffeehouse for each other.   We'll see.   #7 for me was spending time at home, with coffee! oh, and family too.